In August of 2006, the crew of Maiken were sailing to Fiji when they noticed what, from afar, looked like a sandbar. They had been sailing through water threaded with streaks of brown; what they thought might be remnants of an oil spill. So when they noticed the ‘sandbar’ in the distance, they felt they were obligated to check it out.

It was only when they got closer that they realized that it wasn’t a sandbar in the middle of the ocean, but a sea of floating pieces of pumice. They quickly surmised that a nearby volcano had erupted, filling the sea with a covering of pumice several miles wide.

The crew was so busy taking photos of the stoney sea, they didn’t realize that they had sailed about a meter into it. The wind had already died down, so they turned on their engine to navigate back towards normal sailing water.

After experiencing a little bit of engine trouble, the crew quickly cleared the boats engine of pumice and, not knowing which direction was safe, anchored for the evening. When they woke up, the sailed back towards the eruption site, only to discover than a new island had formed!

They watched as the volcano belched and smoked: spewing ashes into the beautiful sky of the South Pacific. The island growing slowly.

How many people can say that they witnessed the birth of an island?! How cool!

Unfortunately, by the time a Volcanologist was able to visit the site several months later- the island had mostly eroded into the sea, though the scent of sulfur was still strong in the air.

What would you name an island if you discovered one? 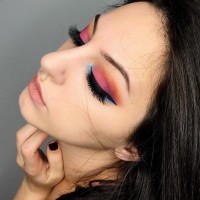 Kaleigh Baschal is a lover of books and anything spooky. She is proficient in passing out in front of the TV, trivia, and dancing in the car like a moron for the sake of making people in other cars laugh. Kaleigh is also the Style Editor at Totally the Bomb (totallythebomb.com) and has her own awesome blog at katyroleigh.com. You can follow Kaleigh on Instagram and Twitter @katyroleigh

« Perfectly Crusted Halibut
Now You Can Contour Like a Unicorn »

Subscribe to receive beauty, fashion, & wellness information right to your inbox.
Your information will *never* be shared or sold to a 3rd party.
625 shares